St. Basil Elementary and Junior High School in Calgary has decided to end their year-end awards ceremony. Unfortunately, when stories about schools that are trying to make changes like this hit the media, the public can have a hard time suspending judgement long enough to find out what is really going on. (If you need proof of this, take a moment and read some of the explosive comments here.)

While it may seem counterintuitive to suggest that we should abolish awards ceremonies and honour rolls, this is precisely what the research has been showing us. Alfie Kohn reminds us that "There is a world of difference between getting kids to focus on their performance or achievement and getting them to focus on their learning."

Some people have a hard time grasping the rationale behind removing awards ceremonies, so let's take a moment and address some of the most common myths about moving away from awards.

Myth 1: Awards ceremonies and grades serve a purpose: they act as incentive and motivation for children to learn.

Many people believe that we need to bribe and reward students with grades and honour rolls to motivate them, in my book De-Testing and De-Grading Schools, I write about why this is folly:

Conventional wisdom tells us we grade students to artificially induce their extrinsic motivation to strive for the reward of a high grade, or to avoid the punishment of a low grade. Either way, it is the carrot or the stick that is the driving force.

There are two kinds: intrinsic and extrinsic. If you are intrinsically motivated then you are doing something for its own sake; if you are extrinsically motivated, you are driven to do something, or not do something, based on a reward or punishment that may be waiting for you. But that is not even the interesting part—the real catch here is that these two kinds of motivation tend to be inversely related.

When you grow students' extrinsic motivation by bribing them with high grades or threatening them with low grades, you run the risk of growing their extrinsic motivation while their intrinsic love for what you want them to learn shrivels. Grades can only ever gain short-term compliance from students when what we really desire is their authentic engagement. If we give grades and our students are uninterested or disengaged, might it be because they are searching for a more intrinsically motivating reason to learn? I suppose we could use grades to artificially induce children to learn, but I would hope we could help them find a real reason to do so. Needless to say, playing on children’s extrinsic motivation to learn is, at best, a questionable practice.

The problem is not that too few students achieve As -- rather, the real problem is that too many students have come to see collecting As as the purpose of school. Things go very wrong when testsandgrades, awards ceremonies and honour rolls become the primary goal of education.

There is an enormous gap between what we know and what we do. Too often what we admire and aspire to does not align with our actions. If we really want children to become life-long learners then it makes little sense to distract them with artificial bribes and awards.

Replacing awards for a few with recognition for all is not about devaluing anything. In fact, it is about broadening our current narrow vision of what is important by valuing more than just grades in academics. Many honour rolls place an arbitrary premium on core academic subjects while placing less importance on classes that we call options (art, foods & fashion, wood working, etc.) This is about shifting away from valuing only student achievement (read: grades) and moving towards valuing a wide range of students' achievements.

For years, I organized and ran my school's awards ceremony and for years I found a disturbing trend: The same children who received accolades all year for their grades were being marched across the stage multiple times during the year-end ceremony. When you really think about it, grades are rewards and awards ceremonies are awards for getting rewards.

When we used to hand out traditional honour certificates to students, I would grow disheartened to find so many of the certificates left behind on the floor or even in the trash. Many students and parents did not value the certificates. However, when we handed out a personalized recognition poster that celebrated a wide range of students' achievements, including a personal message from their teacher, the students and parents showed far more appreciation. I never found any of these posters on the floor or in the trash. Sometimes I wonder if all students valued these posters because we chose to value all students in a personal way.

What if an entire school's population made the honour roll? What would be the public's reaction? Would this be seen as good news? It's highly unlikely that the school would be given admiration and credit for this. It is far more likely that people would say that the school was being too easy on the kids.

On the surface, it appears like awards ceremonies and honour rolls are about excellence -- but that's only if excellence is defined as raising standards until failures are created.

When I ran my school's traditional awards ceremony, less than a third of the students were ever invited -- the other two-thirds were left out. When we moved to recognizing all students for their wide variety of successes and strengths, all students and their families were invited to the event. Some of the most thankful parents are those who have children who would never be invited to be recognized by their school's awards ceremonies -- in some cases that's three-quarters of the school.

Too often when schools get around to recognizing things like citizenship, these awards are artificially scarce which means that many students who exhibit good citizenship are arbitrarily ignored.

Why do we devalue something simply because everyone can achieve it? Do we wear dropout rates as a badge of honour? I would hope not. So why do we scoff at schools that celebrate every student? Recognizing every student is no more an exercise in mediocrity than believing all children should graduate from high school. It might be more accurate to say that mediocre schools give awards to only a few students -- great schools recognize all their students. 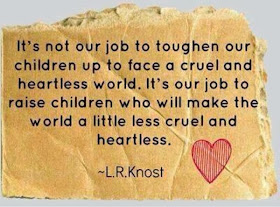 
I did not become a teacher so that I could merely prepare children to live in a cruel and unjust world. I became a teacher so that I could help children grow up and make the world a better place. Yes, the real world is full of competition that makes winners and losers out of everyone, but we don't need to immerse children in competition to learn this. When we teach children about racism, we don't immerse them in racism. I refuse to subscribe to the notion that because children will one day grow up and have bad things done to them that means we need to do bad things to them in school to get them ready for it.

The real world is not a fixed and known place -- the real world can be made and unmade by the people who live there. Too often, the real world is an excuse to do nothing about the inequities that rob children of their futures. I think there is some truth to what Sydney Harris said, "Anyone who begins to call himself a realist is prepared to do something he is secretly ashamed of doing." I refuse to live in a world that doesn't care about how children feel. And if the real world is that cruel and unjust then I'm going to fight like mad to make the real world a better place and I'm going to take my students with me.

Changing schools so that we promote high achievement among all students is not easy. Sometimes the greatest obstacle to changing and improving school is our memory. When some people say they understand what school should look like, they are really saying that they recognize what school was like for them. Too many people are reassured by signs of formal-traditional school and are disturbed by their absence.

That's why when we hear schools trying to make changes to what they've always done, we need to suspend judgement long enough to find out what is really going on, and in the case of abolishing honour rolls and awards ceremonies, the research and rationale are (maybe surprisingly) sound.

For more on rethinking awards ceremonies, I suggest you check out Chris Wejr's blog.

Here's my interview with Doug Dirks on The Homestretch:

Here's my interview on the Simi Sara radio show:

Here's my interview with Jim Brown on CBC radio The 180: